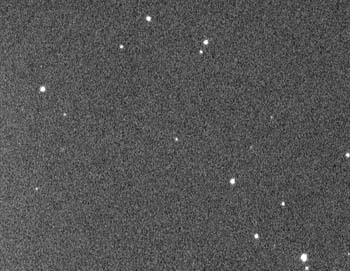 Asteroids reflect sunlight just like the planets do, this means that with a suitable telescope we can see asteroids from the Earth.

When we take pictures of asteroids from the Earth with a telescope we typically get images that look like the one below.

It might be hard to believe, but one of the white dots in this image is an asteroid, the others are stars.

This is worth considering for a moment because although the asteroid looks very much like a star, it is only a few million kilometeres from the Earth whereas the stars are many times further away beyond our Solar System. The difference in the distances is almost unimaginable, and yet they appear very similar in this image.

However, as the asteroid is within our Solar System it does mean that as it moves it will seem to move against the starry background. This is very useful to us as asteroids and in particular near Earth objects can move position noticeably in only a few minutes.

When the image above was taken, 2 more images were also taken at the same time a few minutes afterwards. The animation below is the result of “playing” those images back one after the other so that we can easily compare the position of the asteroid in each image. Astronomers call this “blinking”.

If you look very carefully at the image on the left, you will see one of the white dots moving. This is the asteroid (1078) Mentha.

Although this is an easy example, sometimes spotting the asteoids can be quite difficult.

In the activities in this section of the website, you will have the chance to try spotting asteroids for yourself, reporting their positions and even taking part in genuine scientific work helping astronomers identify the position of asteroids.