Making planets actually turns out to be fairly simple (at least in principle). But before looking at planets we need to have a quick look at how stars are made. Making planets is just part of the process of making stars; in fact, the planets are just the leftover bits once a star has formed. 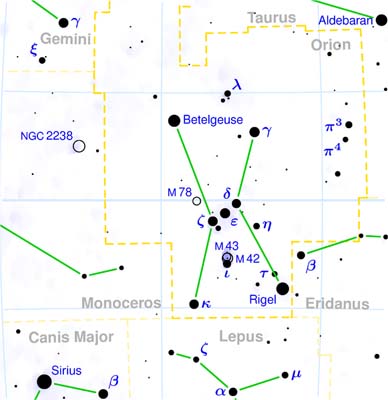 To find out where stars come from we need to know where they are being made. That is fairly simple, because stars are being made all over the place. There is, however, one “stellar factory” that is relatively close to us. On a clear winter night (from the UK) look south(ish) and you should find the famous constellation of Orion high in the sky.

In the middle of the constellation you will find three bright stars in a row – the famous “Orion’s belt”, and hanging below there is a line of very faint stars – his sword. Roughly half way down the sword you’ll find something that looks like a faint “fuzzy” star, but it isn’t a star at all. Through a pair of binoculars you will see a faint cloud, with a bright core; through a telescope you’ll see much more structure, and four tiny stars in the middle. This is the Orion nebula. Nebula is the Latin word for “cloud”, and that is precisely what the Orion nebula is – an enormous cloud of dust and gas (mainly hydrogen) floating in space. It is very big – a beam of light, travelling at 186,000 miles per second would take nearly 23 years to cross it, and it’s quite a long way away – to reach us here it would take that same beam of light over 1,300 years. But, using large telescopes, it’s close enough for us to get a good look at what’s going on in the middle of the cloud.

The middle of the nebula seems to be glowing brightly. It is! It glows because it’s enormously hot, and the gas is being excited by all sorts of radiation. It’s hot because what we are really looking at is a stellar birthplace – our local star factory.

Stars are made in clouds like this because the clouds are lumpy,

not smooth. These lumps are where the gas and dust are a tiny bit denser than the rest, but, because of their own gravity, these lumps begin to shrink. As they shrink the gas in the middle is squeezed, but if you put a gas under pressure it gets hot. Try pumping up a bicycle tyre with an ordinary pump. As you do so the pump tube begins to warm up – that’s because you are compressing the air in the pump, and it heats up.

Our lumps of gas and dust keep on shrinking – there’s nothing to stop them, getting smaller and smaller, and hotter and hotter, until the gas in the middle of the lump reaches a temperature of about 11 million degrees Centigrade. At this temperature hydrogen begins to burn. It’s not ordinary burning of course, it’s nuclear burning – nuclear fusion. What actually happens is that four hydrogen atoms are forced together to make a single atom of another gas, called helium. The problem is that an atom of helium weighs slightly less than the original four hydrogen atoms, so we have lost mass in the reaction. This mass is converted into an enormous amount of energy (e=mc2 and all of that stuff) – it’s exactly the same reaction that you get in a hydrogen bomb! As soon as this nuclear reaction starts the outward pressure stops the “protostar” from shrinking any more, and the new star “switches on”.

So much for stars, but what about planets? Well, as the lump of gas and dust gets smaller and smaller, something else happens. As the lump shrinks it begins to spin faster and faster. Everything in space spins at some rate, but if you make a spinning object smaller it spins faster; expand it and the spin slows down. Watch an ice skater – if they want to spin faster they’ll pull their arms in tight, to make themselves as small as possible. To slow down they stretch their arms out. It’s exactly the same principle at work with our shrinking gas cloud. 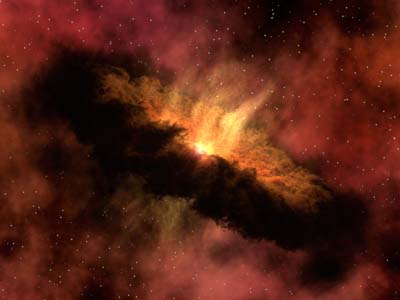 As the cloud spins up it begins to change shape. Because it is a fluid, centrifugal force begins to spread the spinning cloud out into a flat disk. In the middle of the disk the new star lights up, but in the disk itself there are trillions of tiny dust particles and particles that are condensing out of the cooling gas. These tiny particles keep bumping into each other, and sometimes they stick together (electrostatically), so the little bits begin to clump together, and they grow. We may start of with stuff that’s just the size of dust particles, but they clump together and they grow to sand-grain size, then to pebbles, rocks, boulders, mountains. When these so-called “planetesimals” are big enough and massive enough they have enough gravity to attract more and more stuff. Growing rocks constantly collide and smash, but a few will grow to such a size that they aren’t smashed when hit. They sweep up all the remaining dust and rocks, so we end up with just a few fairly large objects orbiting around the new star. It is these fairly large objects that we call “planets”.