Our solar system consists of one smallish star (the Sun), eight planets, a few billion asteroids and a few more billion comets. Add to that masses of dust and gas, and there you have it. 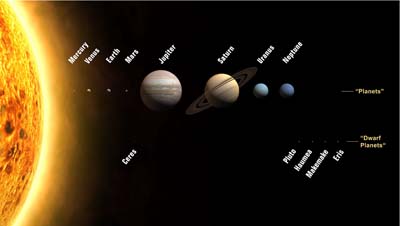 Close to the Sun we have four small, rocky planets – Mercury, Venus, Earth and Mars. These are very much alike, each having a core made of a mixture of iron and nickel, surrounded by a rocky crust.

Beyond Mars there is space for another planet, but it’s not there. What we have instead are the bits that should have accreted (clumped together) to make a planet – it happened everywhere else. What we actually find are millions of bits of rock and metal – the asteroids. So asteroids are bits of a planet that never happened, and it didn’t because of the largest of the planets – Jupiter. Every time the asteroids tried to accrete they were ripped apart by Jupiter’s enormous gravitational field.

Jupiter itself is the largest of the planets, but it’s not solid. Jupiter is a “gas giant”, an enormous ball of hydrogen – the same stuff that the Sun’s made of. It’s not gas all the way through – the outer layers are, but deeper in the planet the pressure squeezes the gas into a liquid, then into a solid. Right in the middle there’s probably a small, rocky core. Saturn is very similar to Jupiter, but is best known for its rings. Actually all of the gas giant planets have rings of some sort, but Saturn’s are by far the brightest.

Beyond the two real giants there are two smaller gas planets, Uranus and Neptune. These are similar to Jupiter and Saturn, but smaller and made of different gasses – they are much colder 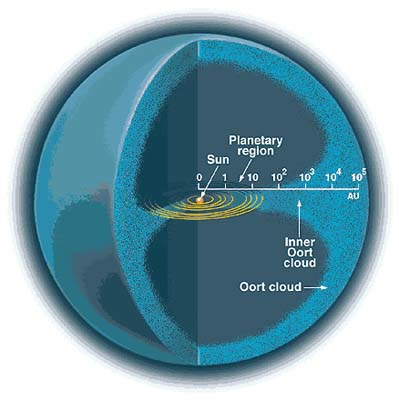 Beyond Neptune things get a bit confused. That far from the Sun the disk of material that accreted to form the planets was really too thin to make more. Once the small particles had clumped together, and were just a few miles, or tens of miles across they were too far apart, so beyond Neptune we find billions of lumps of ice and dirt. Some have more rock and dirt than ice (big icy mudballs) and others are predominantly ice (dirty snowballs), but they are all called “comets”. Some are quite large – one has been mistaken for a planet (Pluto)! These comets can be found in a “belt” around the Sun beyond Neptune, known as the Kuiper Belt, and in a massive “bubble” that surrounds the whole Solar System. This enormous reservoir of comets is known as the Oort Cloud.