Every now and again a piece of asteroid or comet hits a planet. If it manages to reach the ground intact it then becomes a meteorite. Since an object has to be fairly robust to penetrate the atmosphere it is not surprising that most meteorites are fragments of asteroids – predominantly rock and metal.

Asteroids come in three main flavours – big, small and old. Old asteroids are thought to be similar in composition to comets; the so-called “carbonaceous chondrites” The material that they are made from seems to be very similar to the original dust in the disk around the young Sun. In fact there are components that may be a lot older than the Sun, so the old asteroids appear to be virtually unaltered since the formation of the Solar System. 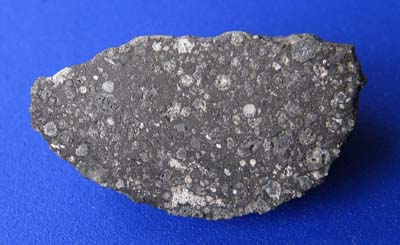 Small asteroids were formed when the dust and particles in the original disk of material around the young Sun began to accrete. Structures called “chondrules” are the original “blobs” of material that clumped together. Chondrules were formed at an early stage in the Solar System’s life, when the Sun went through a violent and unstable period called the “T Taurid” phase. The young star became unstable, and produced enormous flares. These flares melted the dust into small globules that then cooled to form chondrules. Mixed in with the chondrules are flakes of metal – mainly a mixture of iron and nickel. So meteorites from small asteroids will often have well defined chondrules and will respond to a magnet. 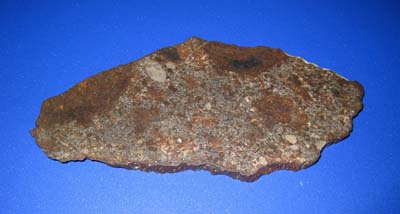 Bigger asteroids melt. They are hit all the time by smaller asteroids, and these impacts generate heat. There are also a host of radioactive isotopes in asteroids that decay, producing heat (that’s what’s keeping the Earth’s core hot at the moment). Small asteroids can radiate the heat away, keeping cool, but the big ones can’t, so they get hotter and hotter until they melt. When they do the heavy material – the metal – sinks to the core, while lighter rock floats up to the outside to form a crust. When eventually the whole thing does cool down we end up with a metal core, made of a mixture of iron and nickel, and a rocky crust. In fact, large asteroids have structures that are very similar to the inner planets. This “differentiated” structure means that meteorites from large asteroids come in three basic types. Firstly we have samples of crust – stony material without much metal (it sank to the core), and little structure (the chondrules melted). 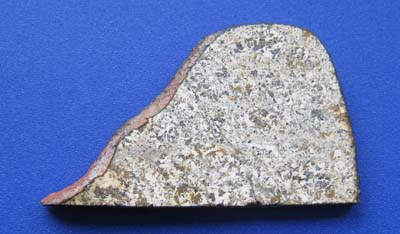 Below the crust we come to the region where crust and core meet – the mantle. Here we have a mixture of metal and rock, typically a matrix of metal with large mineral crystals embedded in it. 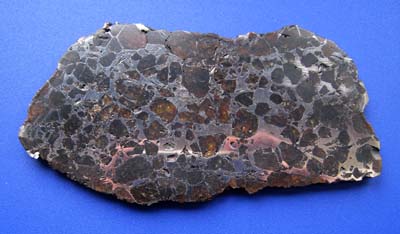 Below that we come to the core – metal. Metallic meteorites can be distinguished from terrestrial iron by cutting a slice of the metal, and applying acid for a few minutes. When the acid is wiped off a clean, shiny surface indicates a terrestrial origin. However, a crystalline pattern (known as the Widmanstätten pattern) confirms an origin in space. The pattern is made up of crystals of two alloys of iron and nickel. The key is the size of the crystals – they are huge! This means that the metal cooled down and hardened very slowly, typically at rates of only a few degrees every million years – far too slow for terrestrial iron! 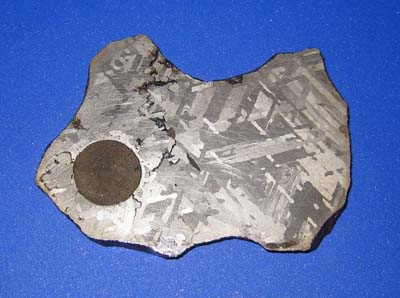 There are other types of meteorite. One class, the Mesosiderites, represents the result of collisions between stony and iron asteroids, while others originate on the Moon or Mars. The latter types were blasted off their parent body by the impact of a comet or asteroid. After travelling through space for millennia they encounter the Earth and fall as meteorites.

Next – NEOs and Impact Effects